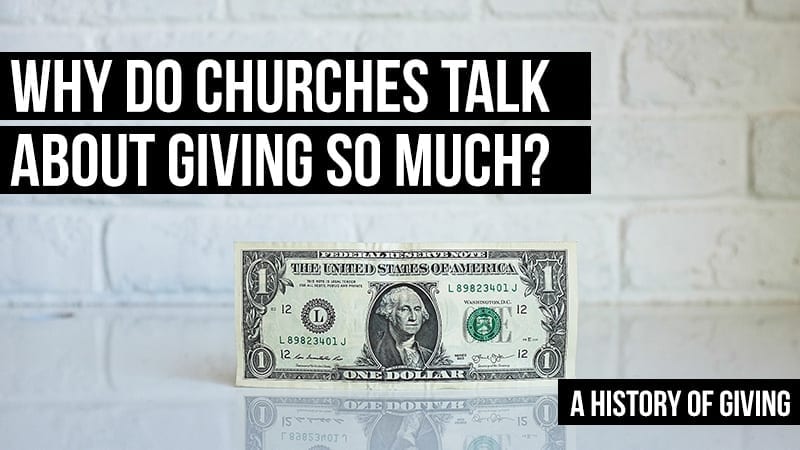 Have you ever wondered why Church’s seem to talk about giving and tithing so much? Does it ever feel like Churches worry too much about money? Why do Churches even talk about money at all? Can’t we just trust God and hope He provides?

These are great questions. I’ve had these same thoughts from time to time and it’s led me to really study the Bible to find the answers. So today, I want to dive in and try to answer some of those questions.

The History of Giving

Giving and tithing (giving a tenth of your income) have been around for literally thousands of years. And when I say literally…I mean literally. The first recorded time we see a traditional tithe in the Bible is in Genesis 14:18-20.

This is such a rich story full of truth that it could probably take an entire blog post just to explain it all. So I will NOT be doing that here. Instead, I’ll just hit some highlights. First, this incident comes off the back of Abraham’s victory. Some bandits had literally run off with members of his household.

He goes after them and wins the day. In essence, God blesses him. Back then winning meant more than just victory it also meant spoils (yeah, bling, swag, etc). Abraham was straight up flexing right now. Off that victory, several kings come out to congratulate him on the victory and one is named Melchizedek.

There’s practically nothing in the Bible about this guy. We’re only told he was the priest of the Most High God and that he was also a king. He offers up a prayer of praise on Abraham’s behalf to God, and immediately following Abraham gives 10% of everything he had just captured to Melchizedek.

Next, we see some commandments on giving in Exodus (Exodus 23:16 Exodus 23:19 ; 34:26). The command here is to give your “first fruits.” That’s not really an amount, just a command to give to God before all of the other demands of life.

Later after the people of Israel are brought out of Egypt God selects the tribe of Levi to be His royal priesthood. Here, we see a command to tithe to the temple as a way of providing for the Levites. God had promised land to all the other tribes, but the Levites didn’t get any. Instead, God intends that they are provided for through the tithing (giving 10%) of the people of God.

What Jesus Said About Giving

God starts to change the focus of giving away from an amount and towards the heart. To Jesus you can’t just show up at church, throw your required amount of money in and be spiritual. Instead, the focus is on the “why” of giving. Paul says, “be a cheerful giver.” The attitude becomes more important than the amount, or even the act!

God would rather have you give $1 cheerfully with the right attitude than $100 begrudgingly.

The early Church really got this right. In the Book of Acts, we see members of the church selling everything they had to help provide for others in the Church and to support the mission of the Church. Also in Acts, we see the first missionaries being sent out; Paul and Barnabas. They do so through the donations and giving of the Church in Antioch.

Throughout his ministry, Paul is constantly taking offerings, yet often he does it to help other churches. Paul himself says that he works to not be a burden. Paul worked as a maker of tents to sell them. Given that Paul worked primarily with Gentiles (IE people who had no spiritual background in the Bible) this makes sense.

He worried about raising the kind of questions I talked about above. He didn’t want money to be a stumbling block for people. So he was careful when he talked about money. But at the same time, he also says he could have required financial support because he was an Apostle. He also tells his protege later in the Bible that Pastors should be paid well.

Back to the Old Ways Again

It’s not too long after this great start that we see the Church shifting money again back to the hands of the religious elite. Soon, the Church (big C) uses money as a way of offering salvation for relatives and individuals. It’s one of the practices that Martin Luther (the great reformer of the Church) rages against in his 95 Theses.

Throughout the history of The Church, we have swung from making giving required, to make it optional. In most cases, giving was a legalistic affair. If you were a good Christian you had to give a certain amount, and the more you gave the more spiritual you were. But that doesn’t line up at all with what Jesus said!

Our Goal for Giving at Grace

At Grace, we strive to return back to the heart and the attitude of giving. It’s the reason we don’t pass an offering plate. We don’t want people to feel guilty! That’s not really giving, that’s just pressure. Instead, we want people to give out of the heart because they love God and want to provide for the mission of the church. Our belief is that is much more like the early Church and closer to what Jesus called for.

So why do we talk about money? Why do we have a LE’T GO movement? Why are we making such a big deal about this if money is meant to be a heart thing?

I’m so glad you asked! I think we see two patterns emerge from the history of giving and tithing. First, giving is a spiritual issue. Second, giving provides for the church staff and the mission of the church.

So to answer your question succinctly; we want to keep the vision of Grace in front of people. We can’t do anything without the support of our people, people just like you! So that means from time to time, we have to make it visible.

Also, as I said early this is a spiritual issue. Pastor Jarrod as our Senior Pastor has a responsibility before God to lead us well in the area of giving. That means challenging each of us to give to God even when it hurts. That often means pushing us out of our comfort zone.

This leads me to my second answer to this question. In American culture, greed is a HUGE problem. It’s such a huge problem we don’t even realize that we ALL struggle with it. I’ve grown accustomed to living with so much (two cars, a nice house, money to pay my bills, heating, cooling, money to do fun things with my family, money for each member of my household to have their own smartphone, money to eat out often, money to buy technology, money for clothing, I could go on).

To most of us, we expect to have each of those things, rather than realizing how much of a blessing they are. We call it “The American Dream.” I’m not knocking that, just trying to point out that it’s really not a dream anymore, it’s more like an expectation.

Greed is an intense desire for wealth. That’s not really how I think about myself but if I’m honest, always wanting something new, always wanting something more, and not being satisfied with what I have pretty much fits the bill. It’s why I buy a new iPhone every other year. It’s why I’m always thinking about upgrading my car…Tesla’s are looking sweet right now. It’s why HGTV sells us on the idea of the perfect kitchen and a perfectly renovated home.

It only works, because we already have the desire in us.

Given that we live in a culture where greed is an expectation and a major struggle for most people (myself included!) it’s something we need to be confronted about often! To be honest, I don’t love it. But there it is, if I’m going to grow I need the leaders of our church, Pastor Jarrod, Pastor Adrian, my lead Pastor, to hit me on these things or I’ll grow complacent and miss the true joy of giving.

Let me know what you think! Do you see the greed in American culture? Do you think it’s a major struggle for people around you? Is it something you struggle with too?

Do you see why our church needs to talk about giving? Do you think there are ways to keep the vision of our church in front of people without talking about giving? Let me know your thoughts in the comments below. We want to hear from you!