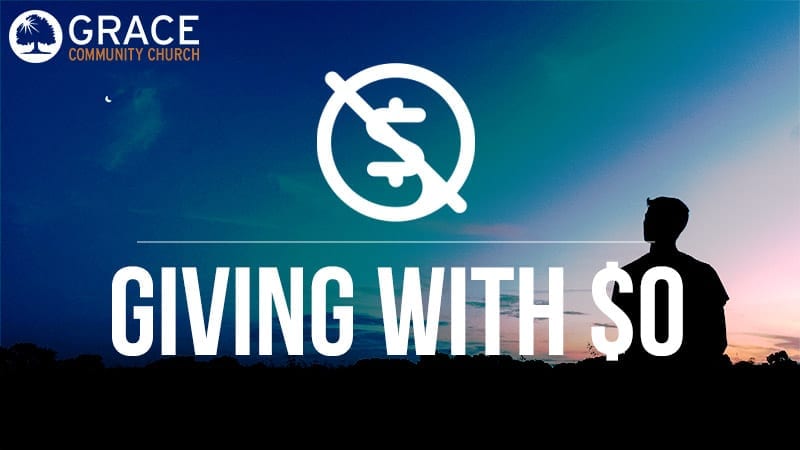 About 6 years ago I lost my job. Well, to be fair I quit more so than lost it. My wife and I moved out of the area to be near family and what followed was 2 and half years of truly hard financial times for us.

During that time we had about 5 part-time jobs between the two of us. I did online freelancing gigs, became a pizza delivery driver, and built websites for churches and non-profits all at the same time. My wife was a dental assistant, then worked in our church in the children’s ministry and at one point she was driving over an hour in the snow.

We did all of this to scrape enough money together just to make ends meet. I hadn’t ever really understood what the term “to make ends meet” really meant until this time in my life.

Almost every day I had this deep gut feeling of financial stress hanging on me. It was my ever-present frenemy for those 2 and a half years.

I went to every job interview I could find; industrial jobs, factory jobs, a college marketing department, my church, and several others. Right smack in the middle of this period in our lives, our church embarked on a giving campaign.

Yep…during the hardest financial times, we had ever experienced the Holy Spirit was using our church to challenge us on giving. I remember my wife and I had some seriously heated conversations through this. We kind of have a rule, it’s ok to yell, as long as we make up at the end, haha.

I’ve been in the church my whole life so I’ve been through a lot of giving campaigns. But they hadn’t ever really pushed me and tested my faith like that one back in 2013.

So there we were, $0 account balance, committed to a church in the midst of a giving campaign, and feeling God pushing us to give. Maybe you’re in that same place. Between jobs, in deep debt, behind in your mortgage, having to work several jobs to make ends meet, and yet feeling God moving at the same time.

If that’s you, this is my attempt to communicate two things. First, I want to say I’ve been there. I know how hard it is, and I know the stress that follows you, I know the fights and frustrations. You are NOT alone.

Second, I hope that by telling you what God helped me learn will in some way help you as well. I know platitudes don’t help your bank account, and you can’t eat verses. But what I’ve learned is that truth found in the Bible can help you learn how to look at hard financial times from God’s perspective.

My Argument with God

Those three were my constant companion and also the thing that God challenged me with again and again in sermons and through His word. Stress, fear, worry isn’t wrong. But they are signals of spiritual things happening in our hearts.

I remember clearly having this ongoing argument with God (metaphorically) in my head. God would say, “Why are you so worried about money?” And I would say, “because I don’t have any and I don’t know how I’m going to feed my family.”

As a man, I felt that the responsibility to provide for my family rested solely on my shoulders. I felt shame and guilt. I felt shame that I couldn’t find a job, I felt guilty that I had quit my job even though I knew it was God that had led me to do that.

Essentially, God was saying that He has the biggest bank account. The challenge for me was to realize that my financial future didn’t depend on ME. It depended on HIM. Could I trust Him to take care of my family? Could I rest in His provision? Could I be calm in the midst of this hard financial time?

Trusting God with my money was about making the conscious choice to decide that God was in control. It was about distancing myself from the idea that I was in control. The more I relied on my own efforts and strength the more the worry, stress, and fear came back to haunt me.

It didn’t truly change my actions all that much. I still went to every interview I could find. I still did every odd job that came my way. It was still a grind. But it did change my HEART. It helped me to be a pizza delivery driver for God’s Glory. It helped me to realize the most important thing: Money isn’t everything.

I think that may have been the biggest lesson that God was trying to teach me. Often we don’t know something is an idol until we lose it. Losing my financial stability showed me that it had loomed large in my life as an idol. It had replaced God in my life.

I wasn’t the type of person who was into material things…well maybe a little. I didn’t see myself as a person who struggled with greed. But God used this time to show me that financial stability was an idol for me.

It was the thing that I told God I had to have. Instead, God wanted to show me that the only thing I needed was HIM.

So what about giving? If you’ve learned the first lesson of trusting God with your money then giving get’s really easy. You do it. We did it because we wanted to be obedient to a God that loved us and gave His Son for us. We carved out an amount and made it a non-negotiable. No matter how hard things got or how low our bank account was that was not going to change.

That leads me to 3 practical lessons that God taught me in this time that truly changed my life and helped me understand God’s heart for giving.

1 | Create a Plan for Your Money

When money is tight having a plan is the only way you’ll know how much you can give. Give every dollar a purpose and make sure some of those dollars march towards the mission of God in the Church.

Take your budget seriously. Be disciplined with how and what you spend your money on. That discipline will give you the freedom to give. When God calls people to give He always ask us to do it in faith.

When you create your money plan, in faith decide on an amount and just do it! If you need help with your money plan Grace has a program called Financial Peace University from Dave Ramsey. It’s a financial planning and money course designed to help people work through this very process. It’s an incredible program and it’s changed the lives of so many people.

There’s a joy in Kingdom giving that can’t be replaced. It’s an echo of the heart of God. God is a giving God. He gave up the greatest and most precious thing He had; His very Son. In 1 John we see that “We love because He first loved us.” I like to think of this in giving terms.

We give because He first gave. We echo back to God and in doing that we join Him in the Joy of Giving. God gave us every dollar we have. Now we get to give some of that back to Him for our Joy and to resonate with His heart.

“Not that I desire your gifts; what I desire is that more be credited to your account. I have received full payment and have more than enough. I am amply supplied, now that I have received from Epaphroditus the gifts you sent. They are a fragrant offering, an acceptable sacrifice, pleasing to God.” (emphasis mine)

This was a small church of individuals who didn’t have a lot of money. Yet they scraped together what they could and gave it to Paul to help him spread the Gospel. His response is powerful: “what I desire is that more be credited to your account.” In Paul’s mind, everything they gave was credit in their heavenly account.

The other thing He says is that their offering was a “fragrant offering, an acceptable sacrifice, pleasing to God.” That is the same description Paul uses in Ephesians 5:2 for the sacrifice of Jesus on the cross. Let that sink for a minute.

Our giving is the same category of sacrifice to God as Jesus on the cross giving His life. I think this points to an understanding that God has. He knows how hard it is for us to give up our money and give it to someone else.

It’s a true act of service and sacrifice that is in the same category of the sacrifice of Jesus’ sacrifice on the cross. That’s why every dollar is precious. It’s why Jesus said the widow who gave a mite gave more than everyone else. Because the giving isn’t the amount. God owns everything, He doesn’t need our money. It’d be like giving a trillionaire our spare change.

The giving is in the sacrifice.

If sacrifice is the key then the money part of this isn’t the only important part. God showed my family that we could give in other ways. We could get creative with our giving. We still gave our money but we wanted to give more. Since we didn’t have any more money to give we found other ways to give.

We opened our home for others to live in it. We became small group leaders. We volunteered at our church and got involved. We gave our time, we gave our possessions. We gave our table to a Pastor that really needed one. We found deals on Baby clothes and donated them to the local pregnancy care center for Moms in need. I donated my time to that same pregnancy care center to build them a website and help them with their marketing.

We didn’t have money to give them, but we had time and expertise to give. We loved people, we discipled people. We found ways to give things other than money.

If you’re going through this LET’S GO campaign and feeling God whispering to you; say yes. Don’t let your $0 bank account factor into this discussion (argument) with God. Trust God with your money, rest in His provision, be calm in His plan, give up your fear for a deep loving relationship with Him.

I’d love to hear your story! Tell me how God has used hard financial times to teach you. Or maybe you just want to share your story so that you know that someone has your back. Or maybe you’ve got a prayer request to get a job. Tell us below the comments.